(reproduced with permission of Bob Montgomery) 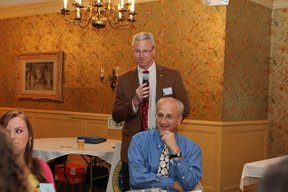 Three times a year, the Bristol Sports Hall of Fame holds a Leadership Council Breakfast at Nuchie’s. It’s a gathering of the juniors from Bristol’s three high schools who are selected for their potential in being team captains and leaders their senior seasons in their sports.

When he graduated Eastern he was the city’s all-time point-producer in basketball. He went on to star and captain both the basketball and baseball teams in college, earning All-New England honors in the two sports. He was inducted into the Bristol Sports Hall of Fame in recent years, as well as the New England Basketball Hall of Fame in 2009.

With leadership being the topic, Jim Bates presented an outstanding program for those in attendance, one also enjoyed by the adults in attendance, school leaders and Hall of Fame directors.

“What is one of the challenges you have in being a captain?” he asked the students.

The answer was: Getting their respect.

“How do you get their respect?” he continued.

He went on to talk about the late John Wooden, famed UCLA men’s basketball coach. Coach Wooden said one’s reputation is what others perceive you to be. Your character is what you are and what really matters is what you have inside.

He went on to talk about Geno Auriemma, coach of the UConn women’s team, and how he was different with his team this year than in previous years.

“He had to treat them as being a younger, inexperienced team,” said Bates. “He knew his old style would not be beneficial to this team.”

He also asked the juniors: “Are you building up or tearing down the team?” Following Bates’ talk, his son, Michael, made his presentation. He’s the coordinator of Connecticut Initiatives for the Institute for International Sport, which holds the World Scholar Athlete Games and World Peace Summit. The 2011 games will be held at the University of Hartford in late June to early July, an effort for young people from around the country and the world to get to know one another and to compete with and against, work with and develop friendships with one another in understanding each other’s world.

“Speakers include General [Colin] Powell, [former] vice-president Al Gore and Greg Mortenson [author of the book, “Three Cups of Tea”],” Michael Bates told those in attendance, and added “there will be 21 sports and eight arts. They will practice for a week and then perform.”

The sports will be in the form of a round-robin and the arts will include choir and symphony presentations, as well artists displaying their drawings and paintings.

During these presentations. I sat at a table with juniors Lauren Dorea, Debra Konopaske, Alino Te and Jacob Eschner of Bristol Central; Kaylee Cifone, Connor Fitzsimons and Mitch Wheelock of Eastern; and Mike Petit of St. Paul, as a Hall of Fame director.